Elijah's father, Leonard Collard, (with the help of others) erected the Death Valley Escape Trail (ET) signs along with the Rogers Pass, Fish Canyon, Silent Seplechre, and Father Fish Death site signs.  In 1992 they hiked (with a film crew) the first 60 miles of the trail from Bennett's Well (DV) to Indian Joe Springs (Trona).  It has taken him over 20 years to complete the documentary, but it is now finished.

Premiere information:
Hiking History: The Death Valley Escape Trail (Premiere)
Saturday Evening Feb. 9, 2013 - 9:00PM to 10:00PM
Panamint Spring Resort Restaurant (Panamint Springs, CA)
FREE Admission
The restaurant will close at 9PM so come early to eat.  The Bar area will remain open during the show.
Please support the restaurant in appreciation for the use of their facility.

Posted by DeathValley49ers at 11:42 AM No comments:

“Kathy’s breadth of experience will be a great asset for the park,” said Pacific West Regional Director Chris Lehnertz. “Her background managing many different types of parks makes her an excellent choice to oversee the varied and complex issues at Death Valley.”

Kathy and her husband Dick are originally from Southern California. Kathy holds a Bachelor’s Degree in Biology from the University of California, Los Angeles.

The largest national park in the United States outside of Alaska, Death Valley is well known for its extremes, especially in temperature and elevation. The park recorded the highest temperature on record anywhere in the world, 134 degrees Fahrenheit, in 1913. Within its borders is the lowest point in North America at Badwater, 282 feet below sea level, only a few miles away from the summit of Telescope Peak, rising to over 11,000 feet. The park is also widely recognized for its colorful landscapes, and for its equally colorful history. More information about Death Valley National Park is available online at www.nps.gov/deva.

“I am humbled and thrilled to be offered the opportunity to work with the community and staff of Death Valley,” states Kathy. “It is exciting to return to the desert and continue to learn about the desert environment, diversity of the resources and incredible culture of the area. I look forward to joining the park team in advancing the stewardship vision for Death Valley National Park.”
Posted by DeathValley49ers at 11:14 AM No comments:


Chet St. Clair was a member in long standing of the ETI Corral 14 Western Wagons. He joined the group in 1989 and was an active member until his passing this year. He was Wagonmaster from 1993 through 2004. When Chet first started doing the Death Valley Wagon Train he was riding his mule Bertha as an out-rider with the Seale's wagon. After that first Death Valley experience I guess it's safe to say he was "hooked" He fell in love with everything about Death Valley and in 1990 built his own wagon, broke a team of mules to pull it and was ready for the wagon adventure. He was joined by his wife Pat and their 5 yr old grandson Willy on this first drive. In coming years his wagon welcomed kids and grandkids plus a few extras. Chet was a dedicated participant in the Death Valley Wagon Train. He worked tirelessly to improve relations between Corral 14, the ‘49ers and the park superintendent. One of Chet's proudest achievements was to have Corral 14 participate in the 1999 Sesquicentennial Wagon Train with a representative six wagons. As the wagon train pulls out of Wades Monument this year many will be thinking of Chet and all the times he called "Wagons Ho!". 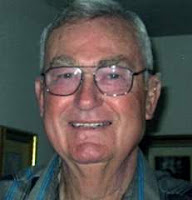 Chester W. St. Clair, Wagon Master, Death Valley ‘49er, and friend to all, passed away August 15, 2012 at age 72.  The Death Valley ‘49ers wish to extend our deepest condolences to Chester’s family and friends.
Chester was born on May 26, 1940, in San Ardo to William R. St. Clair and Gladys Chloe St. Clair.  He moved to Arkansas in 1951 after the death of his father and lived with his grandparents.  His grandfather farmed with a mule team. There he learned to harness and drive horses and mules, which ever was available.
In high school, Chester was involved with wrestling, boxing and FFA.  He then joined the Navy in 1957 and was stationed in San Diego, before transferring to the USS General J.C. Breckinridge, a military transport ship, making 33 trips across the Pacific.
In 1958, Chester met Pat Hildreth in San Diego and married her in Nov. 1959 while living in Oakland, where they stayed until he was discharged in 1961.  He went to work at Owens Illinois Glass in Oakland. The couple settled in Pleasanton where their son Raymond was born in 1962.
After numerous calls from his father-in-law Bob Hildreth to take over the business in Ridgecrest, Chester and his family finally moved in 1963. He operated a tow truck and wrecking yard during the day and then went to work as a car salesman in the evening.  After Bob was killed in an auto accident in 1964, Chester took on the responsibility to operate Hildreth Motors, a Dodge Dealership and AAA Towing company with 24 employees.
In 1966, the couple had their daughter Theresa and their second son Thomas in 1969. In 1988, Thomas was killed in an auto accident.
In 1985, the dealership was sold and they changed the name to St. Clair Automotive, remaining a towing, used car lot and auto body shop.  First and foremost, he loved driving a one-ton truck and the business he had for 64 years with the Automobile Association Club of Southern California.
After a trip in 1990, Chester started a tradition to go to Death Valley in a wagon driven by mules, beginning in 1991.  They didn’t miss a trip until 2011.  He was the wagon master for nine years.  Chester was involved with the California Sesquicentennial in 1999 where he joined fellow wagon masters and had a 100-mile drive into Stockton with all original wagons.  In Ridgecrest, he hauled the Fair directors and Santa in the “old wagon” in the parade the last few years.  He loved seeing the kids react to Santa.
He is preceded in death by his parents William St. Clair and Gladys Chloe St. Clair and son Thomas St. Clair.  He is survived by his wife if 52 years Pat of Ridgecrest, son Raymond of Ridgecrest, daughter Theresa Knight of Ridgecrest, seven grandchildren and two great-grandchildren.  Services were held on Aug. 23 at 9:30 a.m. at Calvary Chapel, officiated by Terry Morrison.  He was laid to rest at Desert Memorial Park.
Excerpt from Death Valley ‘49ers Keepsake 49, Wagons Ho! Corral 14 — Its Living Heritage:

Wagon Master 1993-2004
Chet St. Clair experienced Death Valley for the first time in 1989. He rode his mule Bertha as an outrider with Cary Seale’s wagon. I guess it’s safe to say he was hooked.  The experience started a long time association with Corral 14 and Death Valley. Chet fell in love with everything about Death Valley and in 1990 built his own wagon and broke a team so he could participate in the drive that year. He was accompanied by his wife Pat and their five year old grandson, Willy. Chet has been a dedicated participant to this drive every year since becoming wagon master in 1993. He has worked tirelessly to improve the relationship between Corral 14, the 49er’s and park rangers. Chet and Pat are always part of the wagon train and have brought their children and grandchildren along to experience the wonders of Death Valley. In 1999 Chet was the driving force that put Corral 14 into the Sesquicentennial Wagon Train. He led approximately six wagons on this great occasion.

Posted by DeathValley49ers at 2:54 PM No comments:

It is with deep sadness that I report that Ken Graydon passed away last night, Saturday, July 29th. Many of you may remember that Ken was diagnosed with a brain tumor during last year's Encampment. He underwent treatment this year for this and other cancers. He fought hard and lived life to its fullest during this last year, singing and writing with his usual energy and talent. His music will live on in all of us. We will miss him dearly. Our condolences to his wife Phee and his entire family.
About Ken:


Ken Graydon’s roots are firmly planted in the west. His father was a working cowboy in the Seligman, Arizona area in the 20s. His young antics are the grist for some of Ken’s poems. Ken’s mother designed the family home, an adobe ranch house, in the San Joaquin Valley north of Bakersfield, California. It was built of adobe blocks made nearby. She filled it with Indian and Mexican pots and artifacts. This was Ken’s home where money was scarce and work was hard. The family raised cotton, olives and horses. Ken worked with his parents making it happen which left him with great respect for work and the people who do it. He turned his focus toward cowboys and men of the sea and railroad.

Ken learned as a young kid that he could sing. His mother, younger brother and he sang three part harmony while riding in the car. He learned later that he could write. His songs and poems reflect the wisdom and wit of men who made their way by the strength of their hands and keenly developed native intelligence.

Ken Graydon has come to represent finely crafted poetry and song, not in the sense of the number of CDs and books sold and top gigs on the circuit but rather in the deep respect people give his work. He’s set some California and Arizona history in riveting poems that capture the story better than any textbook can do. He’s told the story of his father’s antics as an Arizona working cowboy in the ‘20s.

“Singer, writer, historian and gentleman, Ken Graydon is one of my heroes and a genuine California folk music treasure.” Dave Stamey
Posted by DeathValley49ers at 5:18 PM 2 comments:

SO SEZ THE PRES

A Few things to consider for the 2011 Encampment

Just a few words about changes to the Death Valley ‘49er Encampment this year. The National Park Service is in the process of a remodeling and upgrading the Furnace Creek Visitor Center. I am told that the Contractor is ahead of schedule! However it will not be ready for this years Encampment. Therefore, some of the events have been moved to other locations. Among them are; The Death Valley ‘49ers Invitational Western Art Show will take place on the lawn by the Basketball Court, with the Quick Draw taking place on the Basketball Court. The Patio Talks will be conducted on the Patio of the Borax Museum. Ted Faye will be showing videos in the evening there also. During the day, videos will be shown in the Marquez Room at the Furnace Creek Inn. This is also where Marvin Jensen’s History Program will be Friday morning.

Because the Temporary Visitor Center is next to the Furnace Creek Ranch entrance, the evening programs normally done at Ol’ Dinah will move to the Golf Course; the same location as the Hootenanny. We will meet the wagons and the riders when they arrive on the Date Grove Road.

Due to changes at Stovepipe Wells we will not have events there this year. However, the Membership Booth will be open. For those wishing a quieter, more relaxed atmosphere, Stovepipe wells is offering 2011 Death Valley ‘49er members discounts on meals, rooms and RV spaces during Encampment.

For current members who will receive a program in the mail, and those who will get one at the encampment, look closely to see how some events have moved to new locations and check the membership booth for any last minute changes.

This year we’ve revived our 4x4 trips into the backcountry, one of them a new adventurous tour to Echo Canyon! Be sure to check out the link for it on the home page.

I am looking forward to welcoming you all to the 2011 Encampment! See you there!